Running through pristine wilderness, it is home to incredible wildlife – and most importantly – abundant runs of large Atlantic Salmon. A lesser known river due to the private access over the last century only now are anglers getting the opportunity to explore the entire river and its glorious pools.

Nature has created a dramatic river with fast flowing gorges and waterfalls. Thanks to these obstacles the Åelva salmon have evolved to be large and powerful. The pools vary immensely from smooth flowing glides where large salmon and sea trout can rest up offering classic pools to cast your fly over; to a series of 6 powerful waterfalls throughout the system which the fish must pass. Two of the falls have specifically designed fish passes to enable safe passage up to the headwaters.

There are two camera’s situated in the river in the fish passes and it is exciting to monitor the fish migrating upstream and observe the size of some of the fish that run the Åelva. 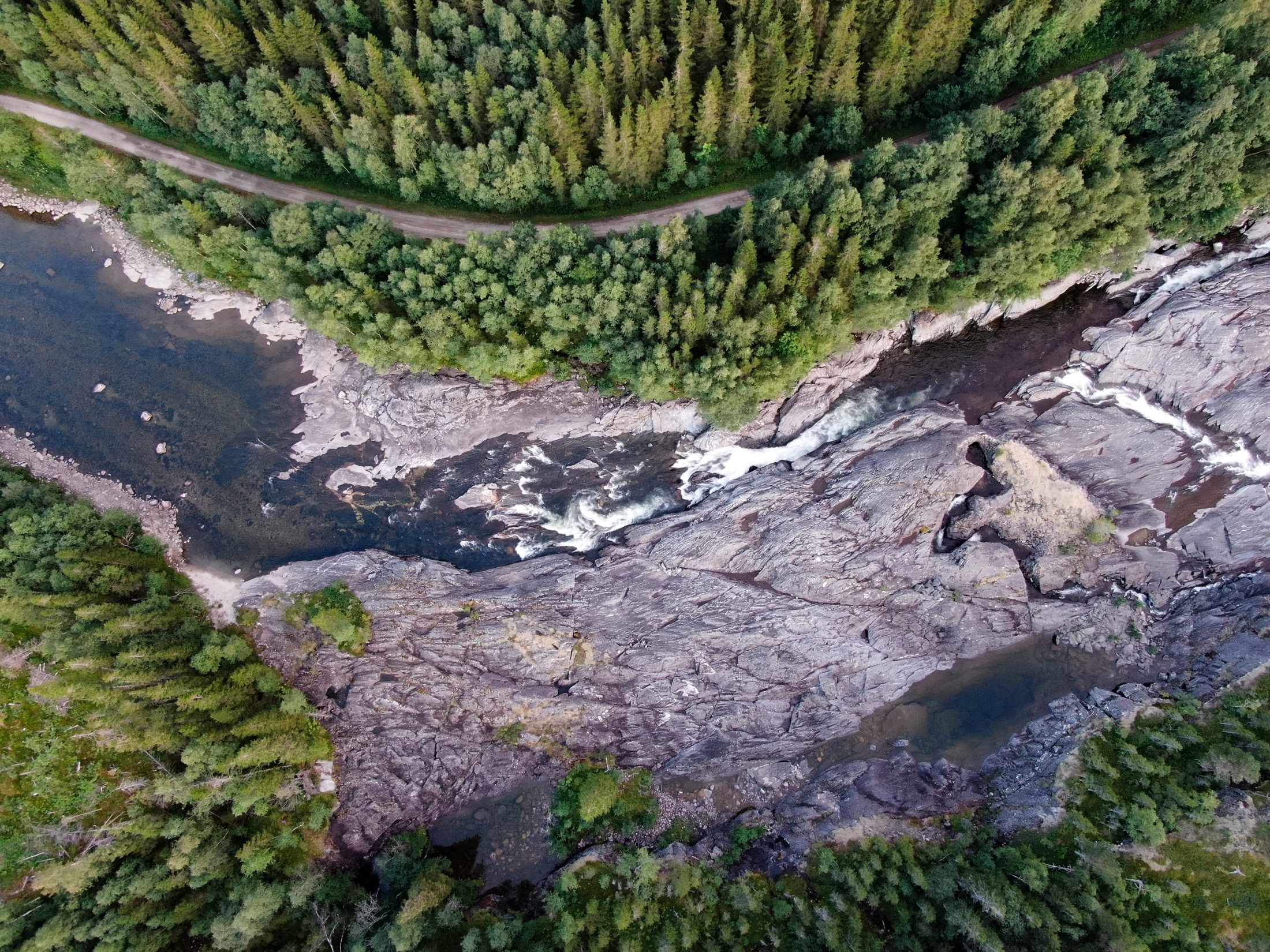 In July 2019 we embarked on our first hosted trip to fish with Fly Fishing Magic Rivers who now manage the lodge and fishing. We were joined by a team of anglers from the UK that were excited to be some of the first anglers to fish the river since opening. Arriving into Trondheim airport we were greeted by a high pressure system and unseasonable high temperates of up to 35 degrees centigrade. Not quite the conditions we were hoping for but we are an optimistic bunch and didn’t let it get us down too much.

Driving from Trondheim to Åelva takes you north west following the hallowed pools of the river Namsen, heading deeper into the Norwegian fjords 4 hours later we reached our destination and were full of excitement.

We were met by the lodge staff who kindly welcomed us and offered fresh cold drinks and canapés on arrival while we got settled in and met with the guides and the lodge hosts. We headed out to the river before dinner for a quick brief on where the pools are and how best to approach them at this height. 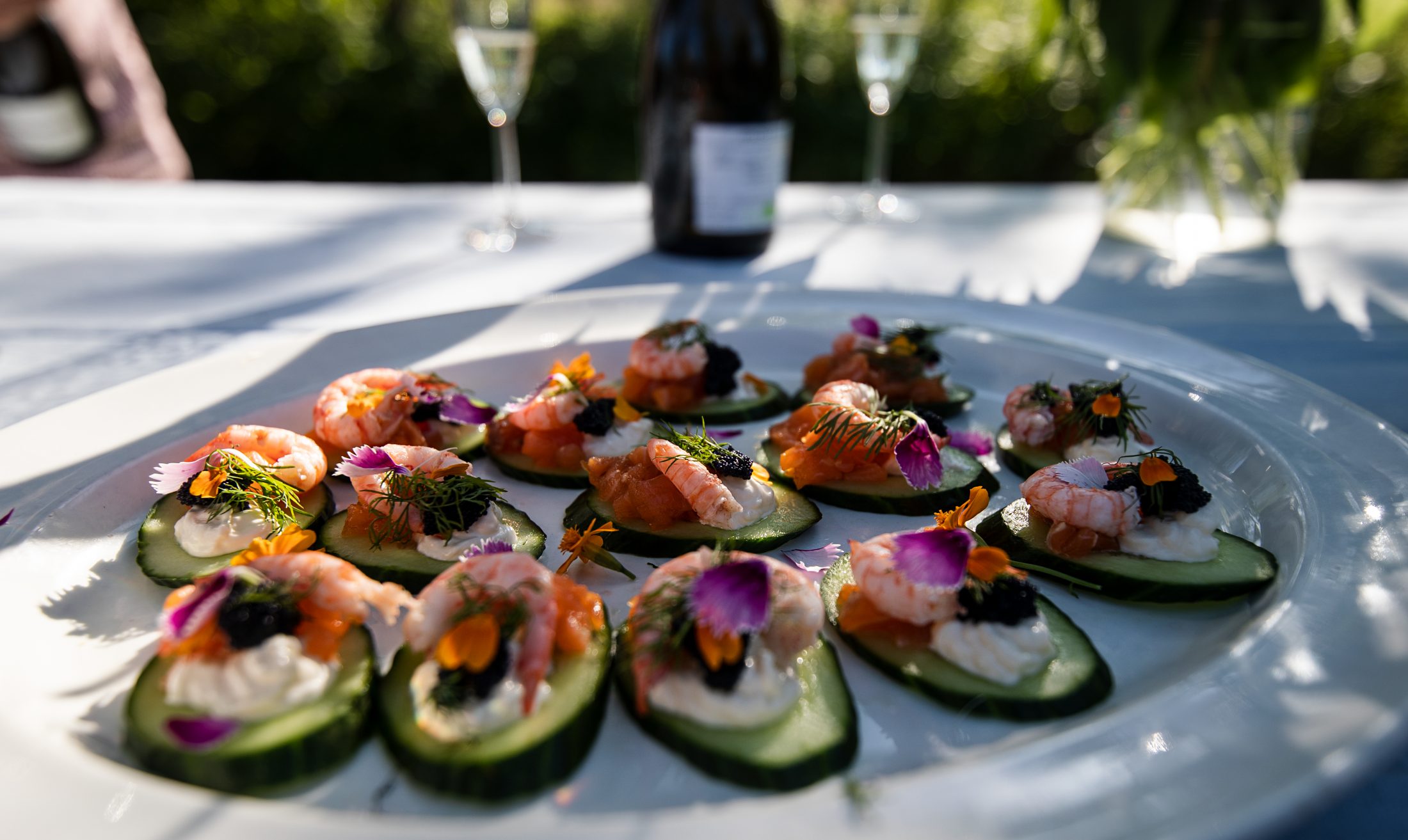 The river was low running at approximately 9 cubic metres per second which offered challenging conditions. We targeted our efforts towards streamy water and fishing the many waterfalls during the day where there were many salmon and sea trout lying in the oxygenated water. Successful tactics were dibbling our flies in the fast streamy water looking for any pockets where fish were lying up. Swinging bomber flies and hitch flies were successful, creating a wake in the fast water often got the fish coming up to chase the riffle that the fly created. 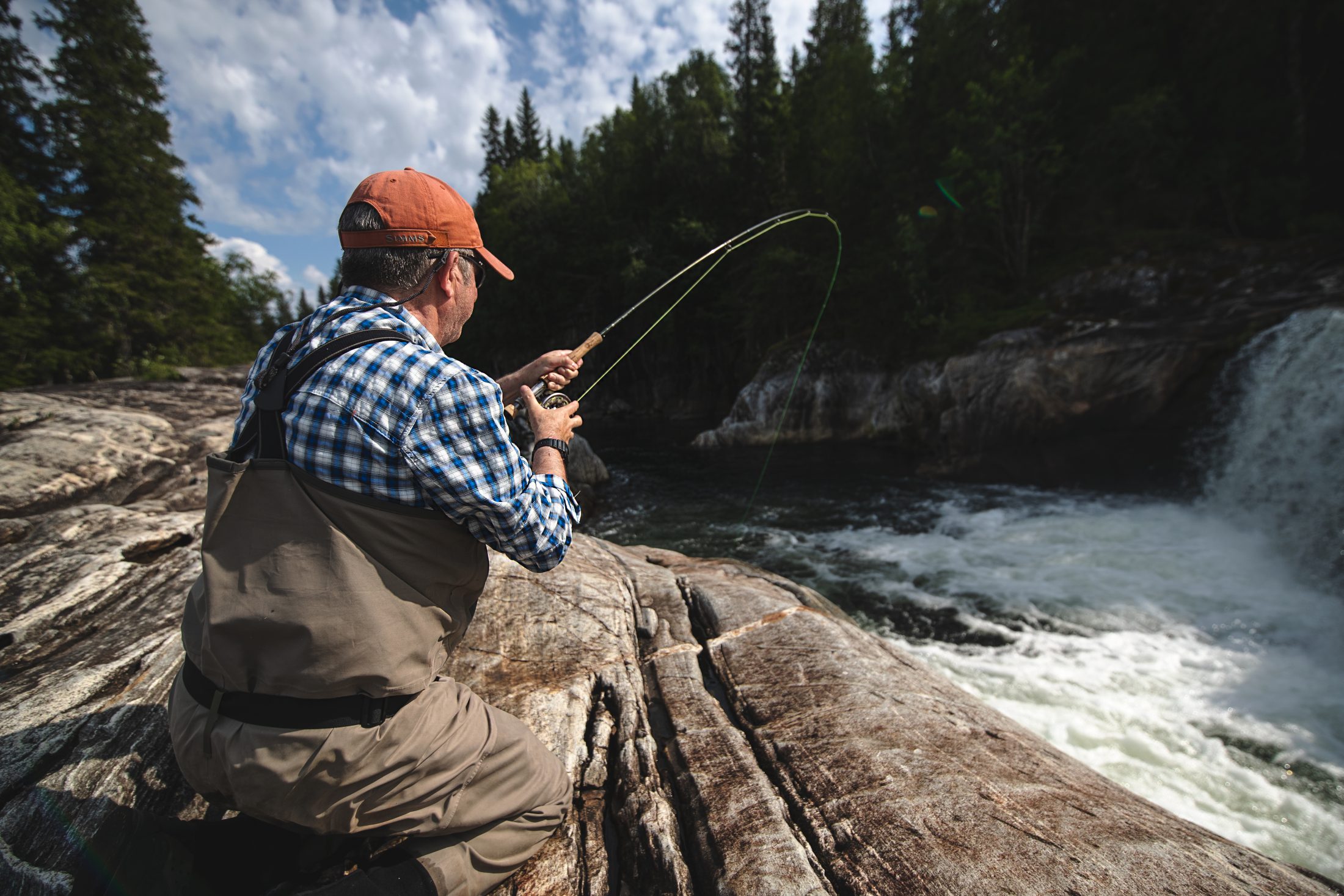 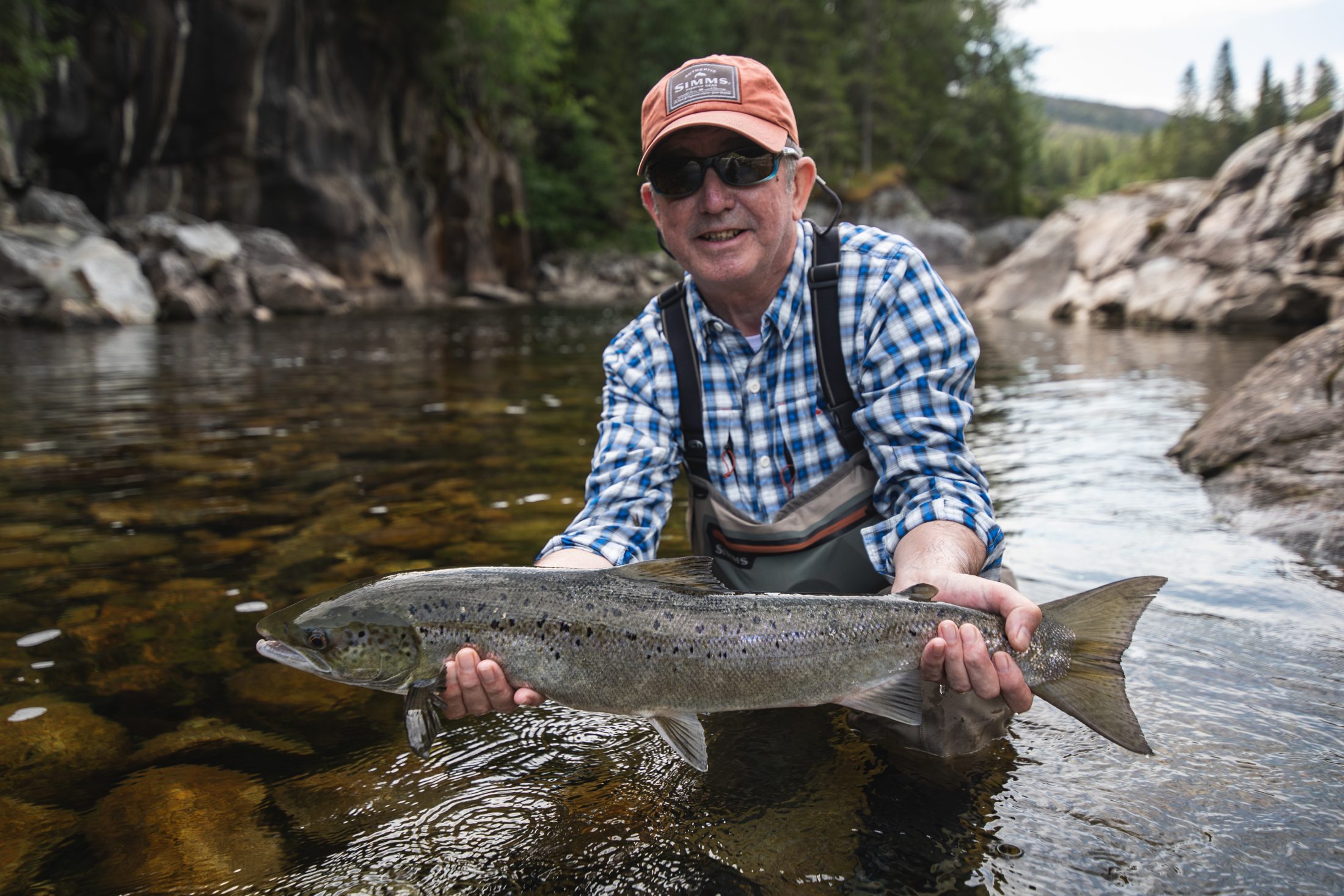 During the hot daytime temperatures the fish often become much more active in the evenings, venturing out of the deep holes and streamy water in to the calm shallower parts of the pools. We tackled up with single handed rods and switch rods with long leaders of up to 18’ with a two fly cast. Small Crathie’s, silver stoats, executioners, toucans, green butts is sizes 12 and 14 was our setup of choice.

One evening whilst taking out Irwin for his first proper go at targeting sea trout in the dark, we rigged up the leader and flies and talked out how to present it.
Irwin questioned “How can they even see such flies in the dark?” “Trust me” I said! Lets go for a fine angle across the pool and swing one just introducing a figue of eight retrieve as it comes away from the current, followed by another cast on a shallow angle and retrieve with the ‘Icelandic Twitch’ (Short, sharp, fast retrieve)

As we approached the hot spot, BANG! A fine sea trout hit the fly like a train, cartwheeled away and threw the hook. The next take in the same place did exactly the same explosive hit, powerful fight and came off just as we were ready to bring it in. 5 heart stopping explosive takes and we managed to land 3 of the sea trout up to 4lb. The next take was something else entirely, Irwin crept down the pool casting a long line with two tiny black flies on when again another explosive take although this time as we heard the fish splashing and cartwheeling down the pool we knew we were into something special.

After a strong fight we expected we would be landing a large double figure sea trout, it was only when it managed to land it we realised it was a stunning bar of silver 17lb salmon. It just goes to show that you often cannot fish flies small enough in low water conditions. 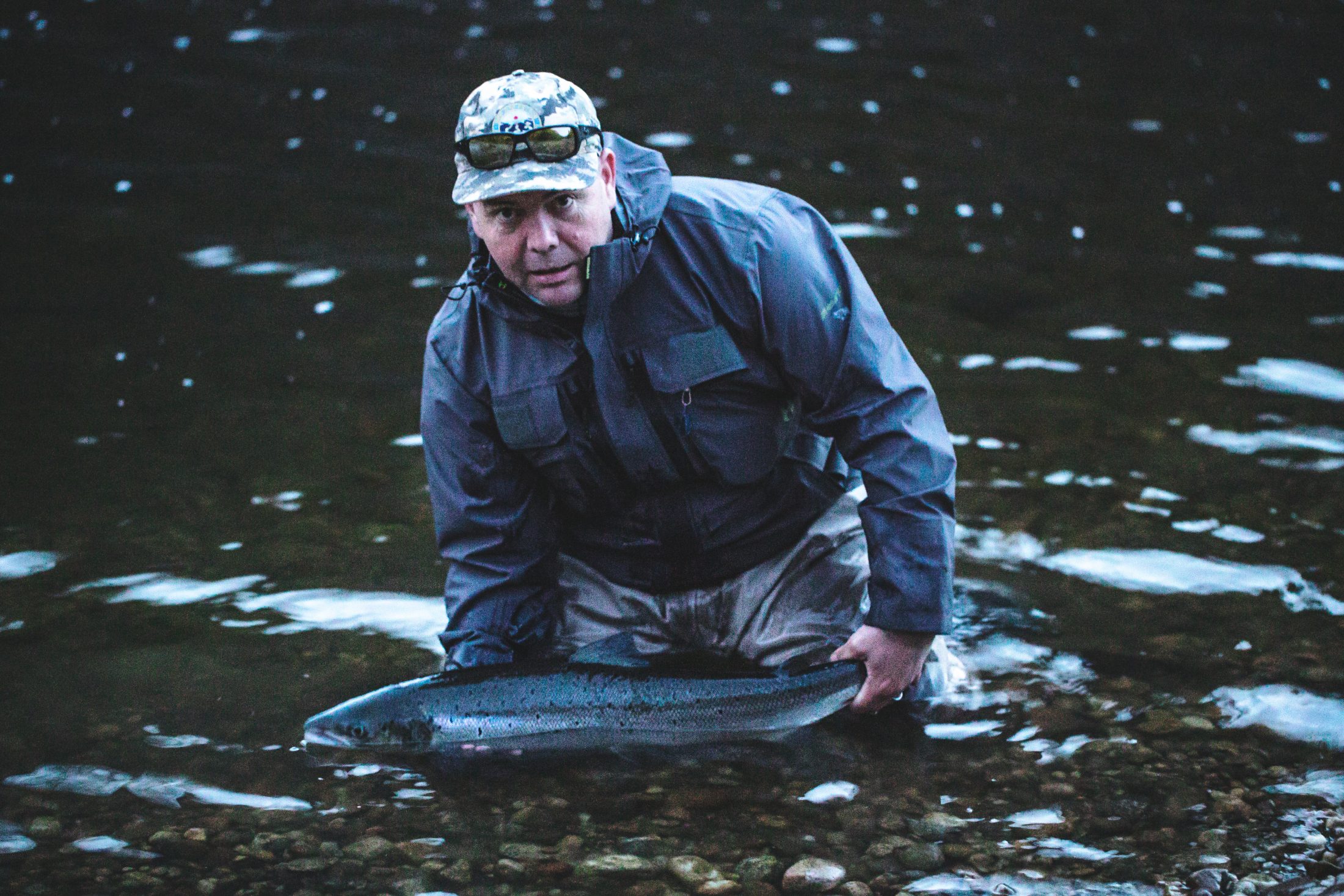 When they won't look at anything

When offered the opportunity to sight fish we always learn a lot about the fishes behaviour and their reaction to flies. Often a starting point for approaching these fish for me is to start with a dry fly, the only reason is that it doesn’t seam to spook fish as a dry floats over their heads and it is such a great way to catch salmon and sea trout. We often use bombers in size 8 & 10 but if the water is particularly skinny I will often start with terrestrial patterns like irritable Adams, royal wolf and sedge patterns before working up to bombers.

If the dry fly is not working I will often move on to a small hitch fly creating a wake on the surface, if they move to a hitch tube but some short I will then move onto hitching single hook patterns as this creates an even more subtle wake.

During our recent trip to Åelva one morning we tried both of these methods to no avail, we then tied up a 16’ leader with two micro trebles in size 16’ and a whisp of dressing, we stripped these over the fish quite fast and had a reaction immediately and proceeded to hook fish. Once they turned off to this method we looked into our box for inspiration and tied on a couple of pheasant tail nymphs size 16 with tungsten beads and drifted them down onto the fish. Presenting tiny flies slightly deeper made all of the difference and resulted in hooking two more salmon.

Sight fishing offers a steep learning curve for all anglers and always inspires me with a new confidence for using those techniques on other rivers where sight fishing is not possible. 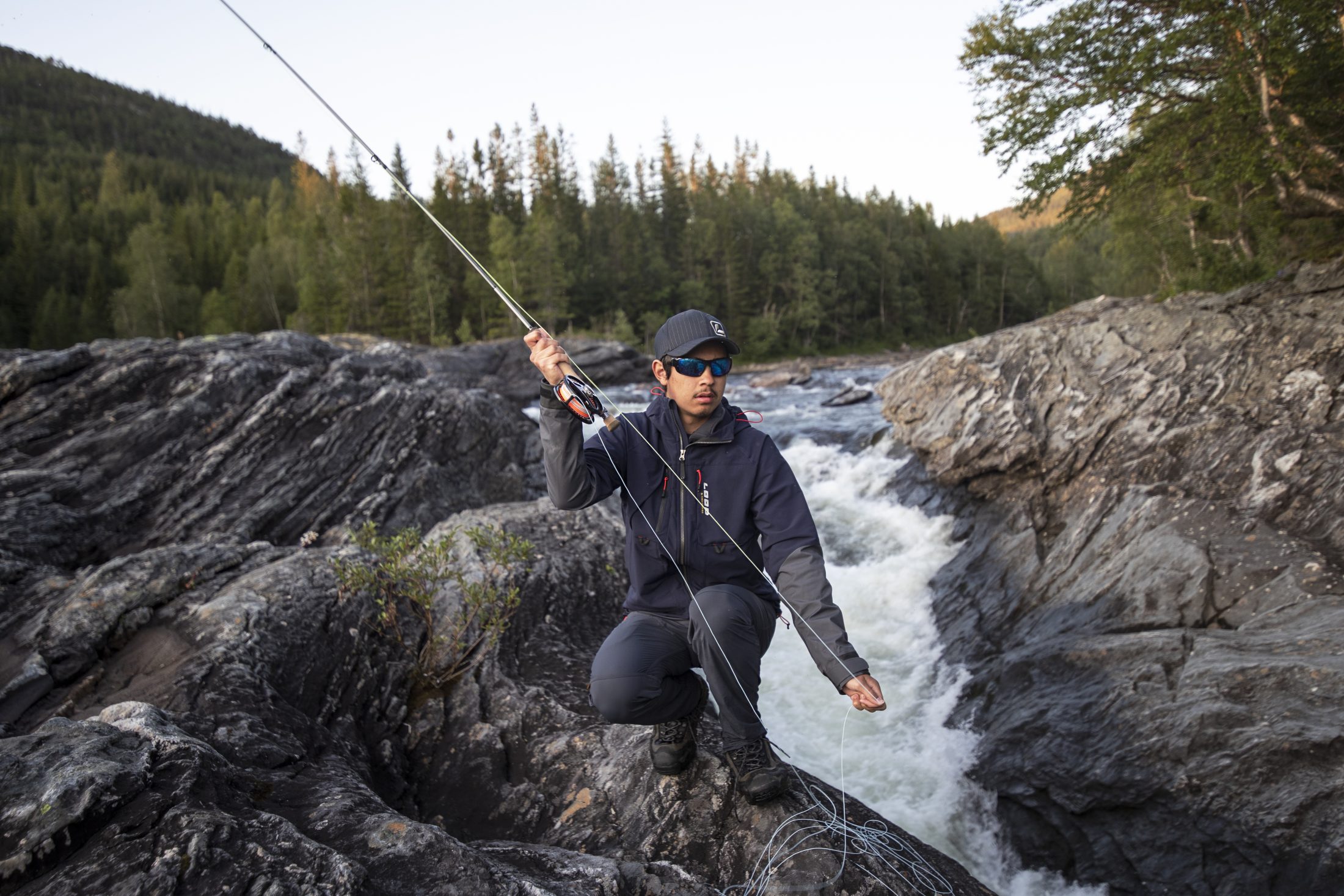 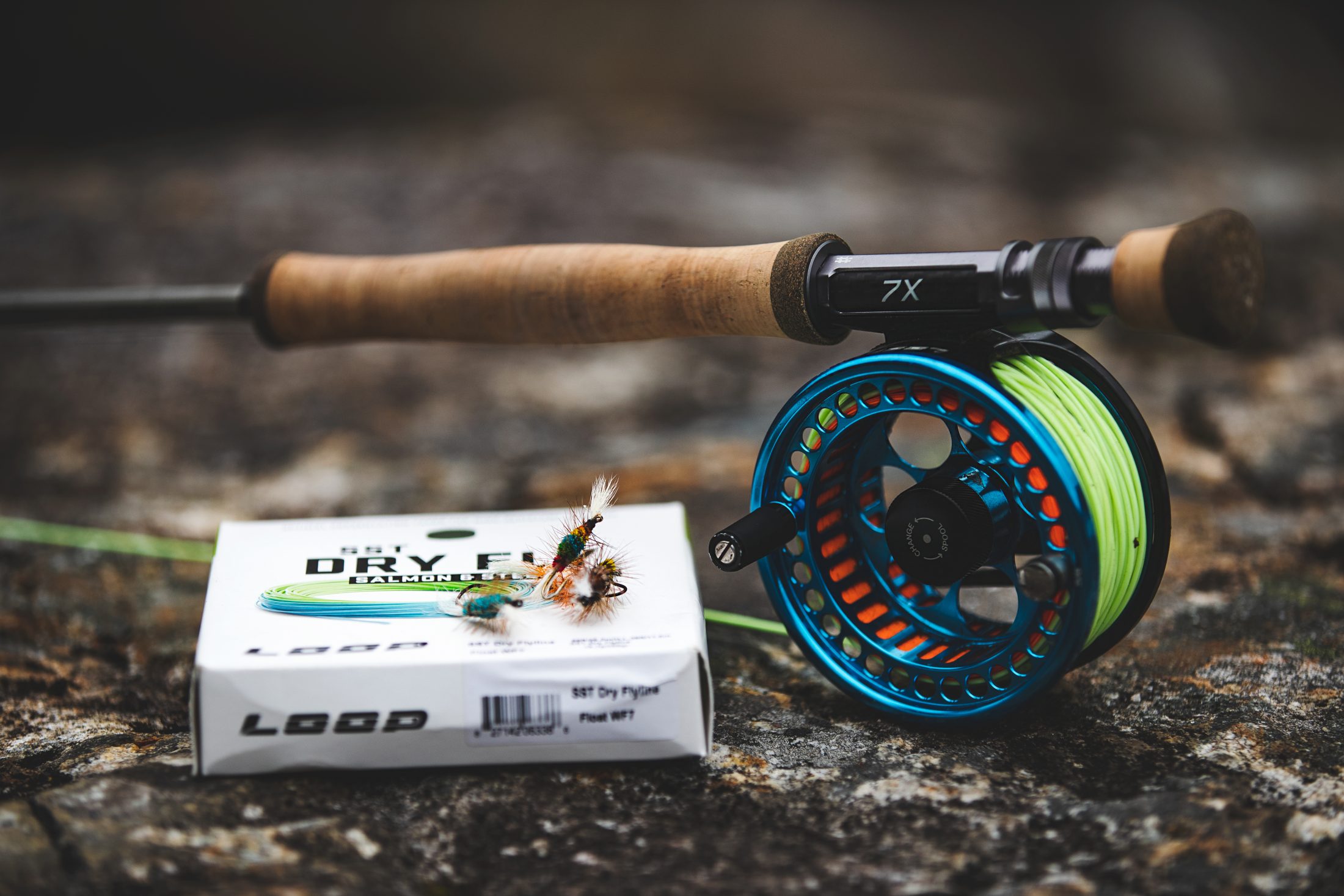